No Longer a Bench Player: A Decade Later, Justice Thomas Gets in the Game

As was widely reported, yesterday marked the first time in just over a decade that Justice Thomas asked a question during oral arguments. Thomas’s questions came about during oral arguments in the case of Voisine v. United States, in which the legal questions are, first, whether a misdemeanor crime with the mens rea of recklessness qualifies as a “misdemeanor crime of domestic violence” as defined by 18 U.S.C. §§ 921(a)(33)(A) and 922(g)(9); and second, whether 18 U.S.C. §§ 921(a)(33)(A) and 922(g)(9) are unconstitutional under the Second, Fifth, and Sixth Amendments and the Ex Post Facto Clause of the United States Constitution. Thomas directed questions to the Justice Department’s lawyer, Illana Eisenstein, about whether there were other areas “where a misdemeanor violation suspends a constitutional right.”

From an adversarial ethics perspective, the questions from Justice Thomas during oral argument signal a significant shift in his view of the proper role of the justices—or, at least his own role—in Supreme Court cases. For one, Thomas has previously said he frequently relies on the written briefs and therefore does not see a need to ask questions of the lawyers appearing before the Court. At other times, he has cited respectfulness to the lawyers and the propriety of not interrupting them. Thomas once mused that, “Maybe it’s the Southerner in me. Maybe it’s the introvert in me, I don’t know. I think that when somebody’s talking, somebody ought to listen.”

In general, however, it seemed he believed that the adversarial process should involve the parties to the case making arguments to the Court—not the Court engaging in arguments with the parties. Thomas has long held that, basically, Supreme Court litigation is adversarial enough without the justices adding to the hostility. At the very least, Thomas has believed that they ought not to “badger people.”

Perhaps Justice Thomas, following Justice Scalia’s death earlier this month, feels that the new makeup of the Court gives the more liberal justices an unfair advantage to pick the winners and losers in cases if he remains silent. Though he might think the justices should be rather more like impartial referees than active participants in litigation, his role as a just another warm body at the end of the bench might be over for good.

On Monday, Justice Thomas was a player. 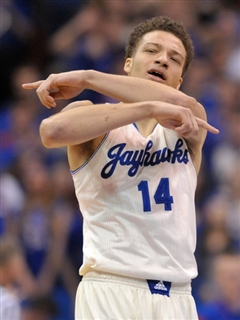 Before the dunk, the KU Jayhawks were winning by 16.

(You can watch it here.)

KU head coach Bill Self called it “totally classless” and “probably the biggest dick move I’ve ever had a player do during a game.”

Other commentators note that “anyone who plays this game understands that you don’t do that when you’re up 16.”

The most likely explanation is probably that offered by Myron Medcalf—that when your team is up by 16 with a few seconds left, “the game is over.” Though not technically true, since the game is not officially over until the time is completely expired, underlying what Medcalf points out is that there are situations (like when your team is up 16 with a few seconds to play) where an adversarial athletic contest is constructively over because the final outcome of the contest cannot reasonably be doubted.

Greene knew, or should have known, that the game was constructively over before he dunked the ball.

When the game is over, we expect the competitors to realize that what constitutes proper (or perhaps “ethical”) behavior is no longer subject to the norms of competition. Before and after the contest, socially appropriate behavior is governed by ordinary conceptions of virtue. Ordinarily, we expect the persons who play basketball to have respect for others in a non-adversarial way, which may include being sensitive to the feelings of the players on the other team—or at least not purposely inflicting emotional distress upon a former adversary.

Simply put, we have different expectations for the actions of basketball players playing basketball compared to persons who play basketball. As Joseph Heath has (in my view, persuasively) argued, “the competitive environment licenses a greater range of ‘self-interested’ behavior.” However, choosing to remain in an adversarial role—remaining a basketball player rather than resuming life as a person who plays basketball—when the contest is constructively over is to abuse that limited license. At bottom, we regard as at least unsportsmanlike the choice to act as an adversary even when you are no longer engaged in competition.

And that choice is a dick move.