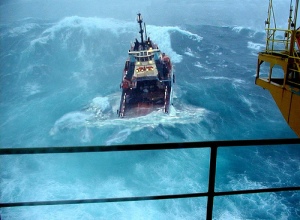 What’s the most deadly occupation in America? According to the U.S. Bureau of Labor Statistics, it’s fishing. Commercial fishing, to be precise. Why is fishing so dangerous? Fisherman can be trapped in a perfect storm of collective-action problems and, well, actual storms.

The harsh competition in this already dangerous industry is leading workers to labor in ever-worse sea conditions in order for businesses to stay afloat (so to speak). The best fishing grounds are often found in the most treacherous seas, and the clock ticks down quickly in some fisheries (say, the crab fishery off the coast of Alaska) where the seasons last only a few weeks. When one vessel decides to go out in stormy weather in order to get a competitive edge, crews of other vessels are faced with the dilemma of either falling behind the competition or following suit in braving the potentially life-threatening conditions.

This dilemma is only exacerbated by the depleted state of many of the world’s most important fisheries.  In an effort to stem the “tragedy of the commons” of overfishing, authorities have commonly resorted to setting an overall limit of fish that can be caught in a given fishery for a given season.  The approach of giving an aggregated limit breeds intense competition because each fish caught by one fisherman entails one fewer available to all the others.  This creates what has become known as a “race to fish” wherein fishermen are willing to do almost anything in order to nab a greater share of the overall quota before it runs out, including foregoing safety precautions.

So this race to fish is really a race to the bottom. One crew deciding to risk the elements in order to gain a competitive advantage starts the race. But once the other vessels join the competition by going out in perilous weather conditions, the competitive edge that motivated the first mover vanishes, while the risk of death for all of the fishers increases.  Thus, in the race to fish we can see how individuals attempting to act in their own interest, while responding to the actions of others attempting to do the same, can all end up worse off.

Is there any way out of this race to the bottom? Some authorities have replaced the overall quota with individual allocations to prevent such fierce competition.  Critics protest, however, that this solution does not live up to the free-market principles of American capitalism.  However, it is evident that the case of a totally free market for fishing (in which fishers and their customers do not pay the cost of replenishing the fish stock) is likely to lead to overfishing and ultimately the end of any kind of market for fishing. What if the rights of individual allocations were auctioned off in advance?

Over at my Food-Ethics blog, I just posted a short piece called “Caution on ‘Green’ Claims for Organics”. It’s about a suggestion, from the head of a UK farming organization, for organic farmers to be cautious about claims that their produce is, categorically, more environmentally-friendly than non-organic foods.

The interesting thing from the point of view of adversarial ethics has to do with the role of industry associations. Industry associations are a mechanism by which businesses that would normally compete against each other engage in certain forms of cooperation. The catch is that some forms of in-group cooperation are socially beneficial (or at least innocuous) while others are pernicious. For example, when companies cooperate on standard-setting (so that, e.g., competing models of computers can all use the same peripherals), that’s a good thing. When they cooperate on prices, that’s called price-fixing, and it’s bad for consumers (and is illegal in most places). In the case cited above, the organization is calling for a stop to in-fighting over the virtues (in the strong, moralized sense of that word) of various products. Whether that’s socially beneficial depends, in part, on the significance of the moral debate that the organization is hoping to stifle.

Any time standards are established for the production of some product, and if money can be made by skimping on those standards…well, skimping is liable to start happening. Nowhere is that worry more obvious today than in the realm of organic agriculture.

Clearly, if people in China, Mexico and Indonesia are cheating, we need to start field testing on a surprise basis to weed them out. I’m not sure why exactly that message bothers some organic farmers, like Thoet, but the good news is that the overwhelming majority of organic farmers in North America agree completely….

It’s also worth noting that, perhaps less obviously, American organic farmers are competing with American farmers who adhere to a “nearly organic” method of farming, but who do not or cannot meet the standard necessary to gain the regulated designation “Organic.”

In each case there’s a competitive environment, subject to a more-or-less formal set of rules; and in each case, the opportunity exists to break rules, or to game them in various ways. Notice also that, when one sees oneself as playing several separate games at once, one has in principle the opportunity to justify cheating at one game by appealing to the rules of the other games. (For instance, “Yes I know I was bending the rules for USDA Organic, but it’s more important that we beat out imports from Indonesia!”) Does this happen in practice?

(See also: The Challenges of Organic Certification, over at my Food Ethics blog.)