Adversarial ethics under the stars: competitive time-wasting in K-Ville 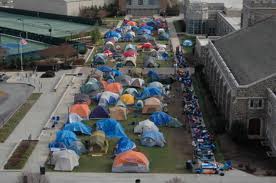 This is the inaugural post by Leonard Ng’eno and Michael McCreary.

Hours before this year’s basketball showdown in Cameron Indoor Stadium between consummate rivals Duke and University of North Carolina Chapel Hill, the chancellor of UNC—Holden Thorp—took an early swing at the Blue Devils by tweeting, “Our students are talking about the future and asking smart questions instead of wasting time sitting in a tent.”[1]

The Krzyzewskiville tradition involving hundreds of Duke undergraduates camping out for weeks in advance to get their single-square-foot claim on courtside real estate for one of the most highly anticipated events in all of sports has become iconic of both the institution and fandom at large.  Duke fans, or Cameron Crazies, are known for their intensity and are proud to serve as the “Sixth Man” on Duke’s squad, providing an added advantage for the home team which is soundly reflected in the record books.  As Duke undergraduates, we were obviously offended by Thorp’s cheap shot at our tradition, our team, and our friends, but after the initial sting began to fade we started to wonder: Was Thorp right?  Is spending a month in a tent in order to see a premier basketball game a waste of time?

We’ll let K-Ville residents speak for themselves as to whether or not their month outdoors was worth their while this year; the specific questions we wish to address are these: What is the function of K-Ville?  What are its shortcomings?  And is there a preferable alternative?

The necessitation of K-Ville comes from the foundational economic principles of supply and demand, where supply represents the limited number of seats available and demand represents the number of undergraduate students vying for those seats.  This excess demand creates the need for some filtration process to achieve equilibrium.  In effect, tenting at K-Ville serves as a kind of “price adjustment” mechanism, increasing the cost (not monetary, but physical) of attendance and as a consequence lowering the demand.

K-Ville, and lining up in general, functions from a deliberately adversarial point of view where many students are competing against one another for a limited number of seats.  The principal shortcoming of K-Ville is that very few students—including the ones who participate—enjoy sleeping out in the cold while concurrently paying for a nice, heated room: grades suffer, relationships are strained, and comfort is sacrificed.  Yet, it is K-Ville residents themselves who dictate their own fate.  Living in a tent is not, strictly speaking, a requirement of attending the game.  Admittance relies on a “first-come first-served” policy, and K-Ville residents are merely admitted because they are the first in line.

In this way, we can see how lining up poses a serious collective action problem; one which, according to Professor Joseph Heath, “can easily degenerate into a race to the bottom, in which each individual, responding to the actions of the others, generates an outcome that is successively worse, but where each iteration of the interaction only intensifies their incentive to act in the same way.” While lining up early may be in one’s own self-interest in order to guarantee a spot, the inherently competitive move prompts others to line up earlier as well and can eventuate into months of waiting for hundreds of students.  On the other hand, if the amalgam of attendees turned up just an hour before the game, the result would be the same as if they had lined up in the same order months ago.

The primary problem in dodging this race to the bottom, however, is that there is no way to know who would commit to lining up first without going through the process genuinely (i.e. with every intent to sleep there for the entire duration).  It could be conceived that one year K-Ville residents decided to form a pact, after completely intending to stay there the whole time, that said they would each get in line in their set order an hour before the game and avoid camping out.  However, problems with this solution would be that there would be no way to prevent others from lining up during that time or to ensure that signatories of the pact would not break their oath.  Furthermore, such an agreement would, to some extent, undermine the legitimacy of the next year’s line, as some might line up with an expectation to make another pact while some might not line up at all, thinking that they could just outwit the people who make the pact this time around.  In essence, there doesn’t seem to be any way to artificially generate and ensure the results of the natural queuing process.

To tackle this problem, we need to reduce the demand for seats by setting up a fair competition that does not lead to a race to the bottom.  In arriving at our proposed solution, we took as a premise that a fair competition is one that favors those who want to go to the game the most (i.e. those who are willing to pay the highest price).  This premise is not only founded upon common marketplace ideas, but also seems to be the source of legitimacy for the existing queuing system.  Thus our method was to find some competitive system that would allow the most devoted students to demonstrate their fanaticism by paying a more productive and fun cost than standing in a line.  By definition, costs are rarely productive or fun (you aren’t going to reduce demand by giving people free candy), and so it took some thinking to come up with something, but in the end we were pleased with our solution.

We propose setting up a competition based on attendance of other Duke Athletics events.  Those who have attended the most Duke games, of any sport, would get priority for the seating to men’s basketball games, including the marquee matchup with UNC.  The university already has a system in place that rewards students for attending sporting events, called The Inferno.  We suggest that The Inferno be expanded to not only give points to students for attending games, but also to reward students with game seats when demand is expected to exceed supply. Thus by basing admittance to the Duke-UNC game on a student’s attendance at other Duke games, we avoid the race to the bottom result that forces students to camp out for longer and longer periods each season in order to attend one game.

[1] Thorp has since taken down the tweet and apologized.

This entry was posted in ethics, gaming the rules, intra-institutional competition, markets, sports and tagged Posted by Leonard Ng'eno, Posted by Michael McCreary. Bookmark the permalink.

2 responses to “Adversarial ethics under the stars: competitive time-wasting in K-Ville”