Congressional Military Oversight: A Trial Without A Judge

The US Congress holds the constitutional responsibilities of declaring war and raising, equipping, and maintaining the military (clauses: Declare War, Army, Navy, Regulate, Installations). The framers of the constitution intentionally gave the legislature these powers to divide control of the military between it and the executive. They sought to prevent either branch of government from using the fighting force to oppress the people or to engage in wanton war making. In short, they wanted an adversarial structure to the mechanism that controlled the military; an institutional check on military and executive decisions that relate to war and national defense.

To fulfill this constitutional duty, congressional committees frequently hold hearings to investigate ongoing military issues, to learn about strategies being employed, and to hold military leaders accountable for the decisions they make. When done right, congressional oversight can be extremely effective (Truman Committee: here). The Senate Armed Services Committee handles these duties for the Senate.

Unfortunately, committee members frequently use hearings for personal or political advantage. Consider testimony on the Syrian Civil War and the Iraq War: 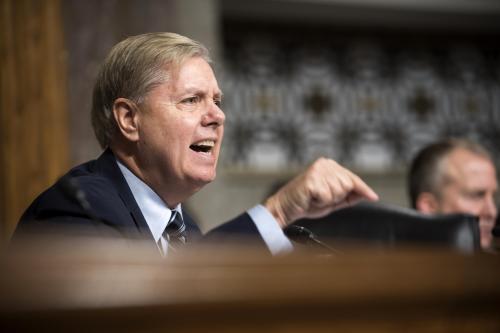 On 10/27/2015, Senator Lindsey Graham (above) engaged in an emotional questioning of Secretary of Defense Ash Carter (below) and the Chairman of the Joint Chiefs of Staff General Joseph Dunford about the ongoing Syrian Civil War. He asked both individuals questions on the US strategy to remove Syrian President Bashar al-Asad from office and in all cases he proceeded to interrupt and answer for the witnesses (video: here). His line of questioning was less about learning and more about criticizing the Obama administration. Despite hearing such as the one shown here, Congress is still yet to authorize the ongoing military operations in Syria and Iraq, consciously choosing not to vote on an Authorization for Use of Military Force.

On 9/11/07, then Senator Hillary Clinton (Dem) spent 6 minutes giving a speech criticizing the Bush administration’s handling of the Iraq War before ever asking a question. In this speech she essentially accused the witnesses General David Petraeus and Ambassador Crocker of lying (video: here; article: here), stating: “Despite what I view is your rather extraordinary efforts in your testimony both yesterday and today, I think that the reports that you provide to us really require a willing suspension of disbelief.” It was later revealed by former Secretary of Defense Robert Gates that Clinton admitted that she only voted against the surge for political reasons (article: here).

In contrast to Senator Clinton, in the same set of Iraq War hearings Senator John McCain (Rep) asked several softball questions that supported the ongoing Bush-Petraeus surge strategy. McCain was a noted supporter of the surge and his leading questions did very little to probe the war effort or provide any real oversight (video: here; support: here).

Although congressional hearings have a question and answer format reminiscent of a lawyer’s examination of a witness in a courtroom and they are similarly intended to seek some approximation of the truth, there is no equivalent to the judge to keep the questions on track and professional. It’s unfortunate that committee hearings frequently turn political instead of being informative. It’s also easy to understand why witnesses so uniformly hate testifying before Congress.