What will Trump play while America burns? 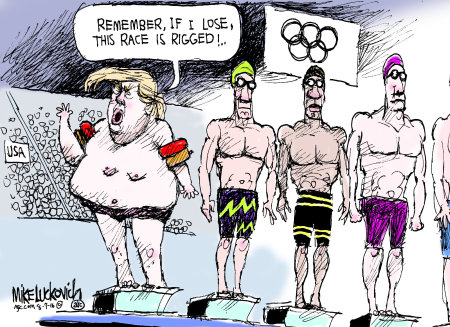 No doubt many of us would consider an election and its attendant politics to be the paragon of an adversarial institution or process. Naturally, we expect a certain degree of hardball from candidates and parties when it comes to a competition for power. However, it’s one thing to raise hell about partisan gerrymandering – the nefarious scheme politicians employ in order to ensure electoral domination by their party and its other candidates – but isn’t it a whole other ball game to claim that an entire election will be rigged and stolen? (Not even that it was fraudulently won, but that it will be. Fear > Facts.)

Donald Trump’s latest, and arguably most concerning, comments regarding the upcoming presidential election have thrown many reasonable citizens into whirlwinds of confusion, anxiety, and outright fear. (If somehow you haven’t yet heard about any of this, this should bring you up to speed.) Those same flippant, yet consequential, remarks have primed his supporters for what may prove to be the least peaceful transfer of power that this nation has ever seen.

When it comes down to it, especially given the salience and perceived importance of the presidency in the minds of many Americans, the United States really only survives due to the gracious and peaceful quadrennial transfer of power from one chief steward to the next after a free and fair election.

While Donald Trump’s warning that such an American rite may be subverted may suggest negative prospects for his ascension to the presidency, giving at least some of us superficial comfort, the fact remains that he seems to have convinced a not insignificant number of ignorant, confused, obtuse, disillusioned, angry, and armed people to prepare for what we can only imagine would be a literal uprising.

Many Americans consider “the election” to be the fundamental institution of democracy, and to spoil our common trust in its practical efficacy and salutary potency disrespects the rules of the game from a procedural perspective – this is a process which he willingly joined and the rules of which he agreed to follow – and threatens the actual security and stability of the United States as a sovereign state. He has stepped beyond his hateful and ignorant remarks to take aim at the very mechanism through which American democracy is able to exist at all.

Sometimes sports fans burn cars or businesses in their own cities when their teams lose, but should a politician burn a whole country when he loses an election?