Are some elections literally slam dunks? Did your Congressman win the way Blake Griffin did? 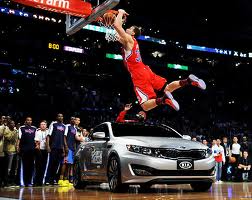 [Note: this is the inaugural post by Brandon H.]

Is politics a sport? Some things such as the rules in sports and the referees who enforce them seem accurately analogous to election laws and the election boards and courts that enforce them. Other more controversial comparisons have been suggested, none more interesting than the comparison between spectators and voters.

The simplest argument against this comparison is that spectators in sports may influence the outcome of the game but they do not directly determine it. To work around this objection, let’s see if there are similarities between (a) voters and speculators in the 2011 NBA slam dunk contest — an example of a sporting event where spectators do have more of a say in the outcome — and (b) the voters in the 2010 mid-term congressional elections.

The 2011 Slam Dunk Contest, which took place in Los Angeles, was highly anticipated for one major reason, the participation of the exciting and high-flying rookie phenomenon Blake Griffin. Blake plays for the local Los Angeles Clippers and opened a nationwide competition that aimed at giving him new dunks that he could use on national TV. Day of the competition Blake was able to electrify the fans and won the competition in convincing fashion. Even those who supported Blake’s victory question whether he was the best actual dunker in the competition. ESPN columnist John Hollinger says “in truth, McGee should have been facing DeMar DeRozan in the final instead of Griffin, but the hometown Los Angeles crowd swayed the judges heavily in Griffin’s favor.” He goes on to say the excitement in the arena every time Griffin dunked was electric and though “it’s not necessarily fair… it’s the reason he won.” In other words he may not have been the best dunker that night, but he knew how to work the crowd and do things they would love, and it was this quality that delivered the trophy.

How does this compare to political campaigns and voters? In recent history there has been a growing trend in campaigns to engage in negative advertising. Often these ads have no information about the candidate’s platform and amount to little more than personal attacks. According to the study by Amherst 54% of ads in 2010 were pure negative advertising. The truth is, whether voters want to believe it or not they are being treated much like the spectators in the Slam Dunk contest. Politicians are trying to distract the voters from the true issues and play to their emotions in order to win. Just like Blake Griffin.

Something to think about next time you hear a political consultant or pundit referring to some candidate’s chance of winning as a “slam dunk.”

This entry was posted in democratic politics, sports and tagged Posted by Brandon H. Bookmark the permalink.

One response to “Are some elections literally slam dunks? Did your Congressman win the way Blake Griffin did?”