When and why do pundits, candidates, and campaign staffers cry foul during election season? As I mentioned in my introductory post, this section of the blog will serve as a sort of data-collection depository for disagreements about what constitutes fair and unfair play in campaign competitions.

At this point, most are likely familiar with Donald Trump’s propensity to personally insult his opponents. The New York Times even keeps a running tally of his insulting tweets (he currently sits at 199). 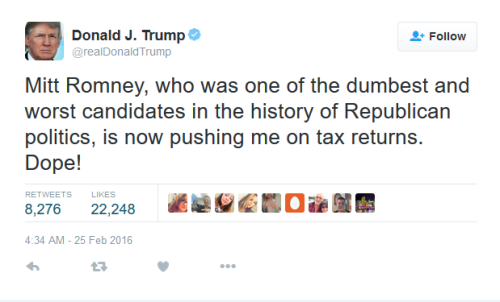 Some argue Trump’s incessant personal attacks are undignified and dishonorable; “Trump has no sense of personal honor. None.” Others claim that his “raunchy language” lack of “basic decency” and “is ill suited to the nation’s highest office.” David Brooks suggests that “Trump’s bashing style of rhetoric makes communication impossible.” Trump’s style of speech doesn’t bode well for democratic governance, Brooks continues, because it forecloses the possibility of compromise and cooperation. Still others contend that his insults are troubling because they inspire Trump’s online followers to harass and intimidate his ‘enemies.’

Last fall in an interview with Megyn Kelly, Trump said: “I think the big problem this country has is being politically correct. I’ve been challenged by so many people, and I don’t frankly have time for total political correctness. And to be honest with you, this country doesn’t have time either” (see here for the full quote). More recently, Trump’s campaign manager Corey Lewandowski asked (rhetorically), “When someone attacks [Trump], should he just not respond? That’s not fair.”

Because of the sheer amount of commentary on all things Trump, it is difficult to definitively categorize critics’ objections to Trump’s actions. That said, some common themes emerge in many of the reactions to his repeated resorts to personal insults. As noted above, pundits (and rival candidates) have accused Trump of being an undignified or dishonorable person. Brooks’ claim is slightly different; he seems to be more concerned that Trump’s habit of personally insulting his opponents makes governing (after elections) impossible. Either way, few have criticized Trump of playing the game unfairly (e.g. bending the rules or cheating). And nobody has accused him of acting illegally by insulting his opponents. Thus, most objecting to Trump’s action accuse him of personal (im)morality in general, and dishonorable behavior in particular.

I have specifically avoided discussing some of Trump’s (and his rivals’) more inflammatory ‘policy proposals,’ here. I intend to address the ethics of those controversial comments (e.g. carpet bombing, the use of torture, name-calling of particular groups, etc.) in another post.

This entry was posted in deliberately adversarial institutions. Bookmark the permalink.

One response to “Upon Further Review: Ethical Controversies in Campaigning”