It seems self-evident that no person should be permitted to judge a case in which they have an interest, but our laws do not yet reflect this principle clearly, if at all. The Brennan Center for Justice at NYU recently published this article about a capital case—Williams v. Pennsylvania—in which conflict of interest has had a leading role.

This is a particularly timely article because the U.S. Supreme Court—narrowly divided on this issue several times in the past, though now more evenly so with the recent passing of Justice Scalia—heard oral arguments in this case yesterday, February 29th. (Transcripts and recordings of the oral arguments will be available here by March 5th.)

What is important for us to note is that, at issue are not disputes over guilt or innocence, but rather whether the fundamental concept of procedural justice has been tainted by a judge’s conflict of interest; and what kind of threat that would pose to both the perception and reality of justice and fairness in our legal system.

As the article notes, we all have the right to a fair trail before an impartial judge; yet

Mr. Williams was denied that right, by any reasonable reckoning, when Pennsylvania’s Chief Justice, Ronald Castille, who is now retired, declined to recuse himself in a 2014 ruling by his court upholding Mr. Williams’ death sentence, notwithstanding an astonishing conflict: He personally approved and oversaw Mr. Williams’ prosecution and post-trial defense of the death verdict in his earlier role as Philadelphia’s district attorney. 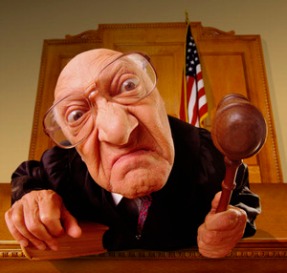 “You look familiar. Have I prosecuted you somewhere before?”

Our legal system is necessarily, and fortunately, adversarial; and removing that adversarial component from this case puts the integrity of the entire system at risk.

Lawyers are to argue their client’s case competently, perhaps even very aggressively, and an impartial magistrate is to judge the proper course of action after listening to and considering both sides. But what might we expect to happen if one of those lawyers were to become the “impartial” judge of the case at a later stage of the trial and then refuse to recuse himself? (Spoiler alert: objectively bad things, many of which are certainly immediately apparent to the reader even as pure hypotheticals.)