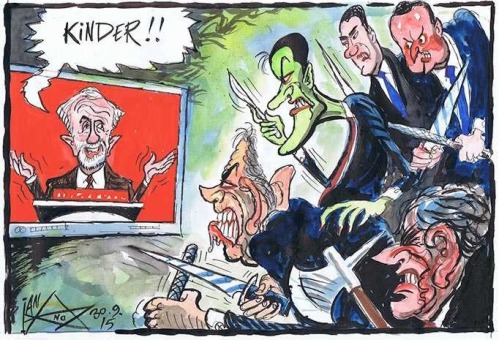 We count democratic politics on this blog as one of the Big Archetypical deliberately adversarial institutions. Power in the state is not given to a person or group who is carefully determined to be able to use it to run the most just government. It is given to the winners of a highly regulated — and also ritualized — contest; otherwise known as an election.

It is easy for us to see and feel the “game” of politics during elections. In America right now we are consumed by it, and it is covered by the news media in almost exactly the same way the sports media covers professional and college sports leagues. But elections are only part of the game of democratic politics. The next most visible political competition happens openly in legislative assemblies, and then in the maneuverings — partly public, but often in “back rooms” — that precede the debates and votes that take place in the legislatures.

One of the principal complaints about the legislative game, from the point of view of adversarial ethics, is that it has become in the US a so-called “permanent campaign” — legislators between elections are primarily concerned about what they can do (or avoid doing) in the legislature in order to win the next election. If they ever care the slightest about the design and justice of policies, bills, and laws, it is only insofar as public perceptions about these things will influence the next election. (See the criticisms of Mitch McConnell discussed here a few days ago.) This is the heart of the satire in the greatest just-slightly-fictional political comedy ever, the BBC’s Yes Minister (and its sequel Yes, Prime Minister), not to mention the now-sharked House of Cards.

This post, however, is less about the “permanent campaign” than about a much more visible manifestation of politics-as-sport (even bloodsport, on occasion). Every legislature has its own written and unwritten rule, conventions, and rituals of debate. And no legislature has had more time to develop these than the British House of Commons, where the Prime Minister and the Leader of the Opposition debate face-t0-face on an almost weekly basis. It you were designing from scratch the rules by which a deliberative body would be most likely to develop and enact sensible legislation (what political philosophers do when they theorize about “deliberative democracy“) you would not end up with something like the House of Commons. To say nothing of the House of Lords or the Monarchy.

That said, in the UK, it is what it is. All MPs know the rules, written and unwritten. For example, they never address each other directly, but carry on the debate as if everyone were trying to convince the Speaker. Although outsiders may be aghast at the seemingly buffoonish behavior of British MPs in the House, the MPs themselves are expected to know how to deal with it if they are to have any chance of “winning” the day during Question Period.

Which brings us to the clip-of-the-day in my Facebook newsfeed. Comments on Facebook and Twitter from many of my American friends and friends-of-friends suggests they don’t really know how British politicians, especially the PM and the Leader of the Opposition, are expected to play this game. What is obvious, however, is that virtually every MP on both sides of the isle knows who won and who lost this round.

I see that many British commentators (well, some of my British Facebook friends, at any rate) have all sorts of sinister explanations for the irrepressible smiles of Jeremy Corbyn‘s colleague Andy Burnham, the Shadow Home Secretary, seated behind Corbyn, on his left. I am too ignorant of Labour Party intrigue to psychoanalyze him from this clip alone. It seems to me that Burnham knows the rules of the game, knows that his leader has just been blown up by his own pompously lobbed petard, and done so because of the kind of quick wit one usually sees only on scripted shows like Jon Stewart’s old Daily Show. Burnham seems to be tipping his hat for a move well played by his opponents. Normally, that is one of the hallmarks of good sportsmanship. Corbyn’s inability to do the same, and to immediately change course and attempt to seize rhetorical advantage in a way he had not planned, is also a sign that he either does not understand the game he is playing during Prime Minister’s Questions or, more likely, that his game as a parliamentarian is just not that good.